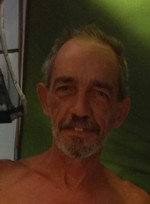 Timothy was born October 18, 1961 the son of Doran Alexander and Bernadine Mae Hunt.
He preceded in death by his parents and one brother, Michael Alexander.

Tim was man that could make just about anyone smile, he was very outgoing and loved people. He enjoyed the outdoors, camping and fishing. He was an avid collector of garden gnomes. Tim was a wonderful brother, father and grandfather. He will be missed by many.

Services will be held at a later date. Tim’s wishes were for cremation.

Condolences can be left online at www.asimplifiedfuneralsolution.com