To share your memory on the wall of Stephen Klein, sign in using one of the following options:

Print
Steven Klein the age of 73 of Princeton, Missouri passed away on Friday August 22nd, 2020.

He was born on September 15th, 1946 to Anthony and Alice Klein who both preceded Steven in death.

Steven grew up and lived his chil... Read More
Steven Klein the age of 73 of Princeton, Missouri passed away on Friday August 22nd, 2020.

He was born on September 15th, 1946 to Anthony and Alice Klein who both preceded Steven in death.

Steven grew up and lived his childhood in the St. Joe area and graduated from Central High School in St. Joe and later from DeVry University Missouri Institute of Technology. He then went on to serve in his country in the Vietnam war stationed in Korea. He was a tank and chopper mechanic and received a medal of honor for his efforts in saving many people involved in a bus accident.

Steven was full of love and believed in sharing the love. He self-identified as a hippie turned Jesus Freak. In his younger and lost years and stumbled into Krug Park drawn to the Christian music being played he met Jesus. That moment in the year 1972 forever changed his life and soon after he met the love of his life and married Patricia Ann. Together they strengthened their faith and became a beacon of light and hope to so many others.

A burglarious strong, proud German Scottish Irish mutt who loved people sharing the love and sharing the love of Christ. He was a Chocolate milk connoisseur who even corrupted his granddaughter, despite her age and mothers wishes. He loved his grandkids and enjoyed being a kid with them. He loved sledding with them and showing off while sledding at Longview dam. He also loved the outdoors, woodworking, hunting rabbits and deer. Steve also had a love of music and believed in devoting his time to help other young artist in the Christian music industry.

Steven and his wife shared their home with many. He loved to just sit out playing music specifically Classical German, Scottish and Irish as well as The Blues, Modern Christian Music and was a supporter of young Christian artists devoting his time to help with sound and production.

To send flowers to the family or plant a tree in memory of Stephen Anthony "Steve" Klein, please visit our Heartfelt Sympathies Store.

Receive notifications about information and event scheduling for Stephen

We encourage you to share your most beloved memories of Stephen here, so that the family and other loved ones can always see it. You can upload cherished photographs, or share your favorite stories, and can even comment on those shared by others.

Posted Aug 28, 2020 at 11:30am
Our thoughts and prayers are with th all. Hope this tree will let his memory live and give back for years to come

Posted Aug 27, 2020 at 09:24pm
We were both from St. Joe and the same parish and I knew Steve as my friend, Richard's, big brother. I didn't get to know Steve until the days of Agape Ministry. We hit it off on a couple levels--as Jesus freaks, of course, but family, work, and mutual interests. Saw his family grow and life go on, and always enjoyed his enthusiasm and encouragement. I'm grateful for our connection, but especially for the eternal one in Christ. RIP, Steve.
Comment Share
Share via:
A(

Posted Aug 24, 2020 at 07:14pm
Sorry, but I think this is just going to be a list. I don't know how to convey the breadth my experience with Steve other than as a series of snapshots and concepts.

Sunday School in the afternoon, in the basement of the Grandview Lion's Club.
Patience with endless demands, "Can Canaan come over? Can Canaan spend the night?"
Picnics and birthday parties at the brick house in Grandview, lightning bug rings, tickle fights.
A bite out of Canaan's egg roll in the food court at Bannister Mall. And Ariel bit the other side.
Cherry bombs and M-80s at midnight in the street in front of our house.
Pancakes that are homemade, the mint-flavored ones colored green. The cinnamon ones were red.
Always animals around; dogs, cats, rabbits, geese, goats, dogs, cows, ferrets, and more dogs and cats.
Waking up at the house in Paola in the middle of the night, going downstairs to taste-test the turkey he had just taken out of the oven.
The biscuit and gravy he bought me one morning on the drive back home after visiting for the weekend.
The iced tea he always had. Extra-large.
The twinkle in his eye. Always extra-large.
The size of his heart. Extra-large.
Comment Share
Share via:
CR

Being half of the postal delivery system of diaries and letters. Godfather's Pizza after church. Thank you, Beloved. 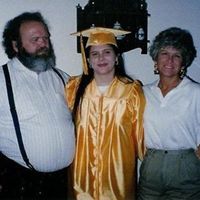 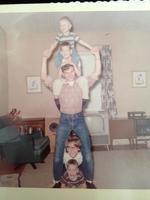 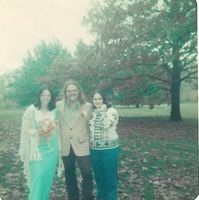