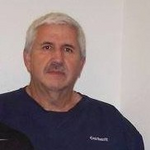 Lyle Talbert peacefully passed away on January 21, 2021, at his home with his family by his side.

Lyle was brought up in Greentop, MO where he attended and graduated from Schuyler County High School in 1971. He worked for several years at Florsheim Shoe Company and Kraft Foods and also worked as a private construction contractor. Lyle coached summer baseball in Novinger when his boys were young, while also volunteering his time with the Novinger Rural Fire Department and the Boy Scouts of America. Lyle enjoyed the camaraderie of hunting with his family and friends. He also enjoyed fixing things; from the smallest gadget to a home, he could do it all. Because of Lyle's tall stature, he was affectionately known by many as Big Dog. But don't let the nickname fool you. Lyle was a kind, caring, quiet and thoughtful man with a humbleness of which society seems in short supply.

It was Lyle's request to be cremated and, due to concerns regarding Covid, for a service and celebration of life to be held in the springtime.

Memorials may be sent to A Simplified Funeral Solutions.