To share your memory on the wall of Joan Carroll, sign in using one of the following options:

Joan Wiley Carroll was born March 27, 1935 in Cambridge, Illinois to Julius Wiley and Lucille McCurdy Wiley. In 1944 her family relocated to Philadelphia, Missouri.

Graveside services will be held Friday, August 2, 2019 at the Emden Memorial Gardens Cemetery, Emden, Missouri. Visitation is 10:00 AM – 11:00 AM with services beginning at 11 AM.

Joan retired from the Food and Nutrition Department at Hannibal Regional Hospital and worked in the Food and Nutrition Department at Maple Lawn Nursing Home. She was not happy unless she was making chocolate chip cookies or cooking for company. She loved to cook and her friends and family love for her to cook. When you visited Joan, she was never without a pie in the freezer and a smile on her face that you were in her home. Joan was one of the most hospitable and giving people God created. You could always count on her to send a birthday card to those she loved. Her faith, family, and friends meant the world to her. Joan was a member of Calvary Baptist Church in Quincy, Illinois.

Memorials are suggested to the Muscular Dystrophy Association of Central Illinois.

Condolences and memorials may be left, and flowers ordered online at www.asimplifiedfuneralsolution.com
Read Less

To send flowers to the family or plant a tree in memory of Joan Carroll, please visit our Heartfelt Sympathies Store.

We encourage you to share your most beloved memories of Joan here, so that the family and other loved ones can always see it. You can upload cherished photographs, or share your favorite stories, and can even comment on those shared by others.

Terry and Sherry Leeds and Kandy Leslie have sent flowers to the family of Joan Carroll.
Show you care by sending flowers

Posted Aug 06, 2019 at 06:58pm
Hello from Kewanee. I am so terribly sad for our loss. Joan's passing is all our loss. we dearly loved her and will miss her at the next family reunion. you are all in my thoughts & prayers. love to all Patty Wiley
Comment Share
Share via:
TL

Terry and Sherry Leeds purchased the Love's Journey for the family of Joan Carroll. Send Flowers

Posted Jul 30, 2019 at 04:56pm
Joan was such a blessing in our lives. She was always so loving and caring towards us and we will miss her! With prayers and deepest sympathy,

Flowers were purchased for the family of Joan Carroll. Send Flowers

Flowers were purchased for the family of Joan Carroll. Send Flowers 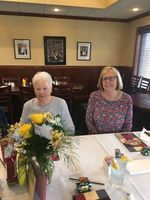 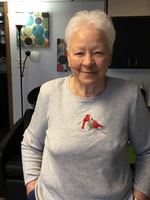