To share your memory on the wall of James Cook, sign in using one of the following options:

Jim was born on September 23, 1954 in Des Moines Iowa to Marvin “Pete” and Mary (Donahue) Cook and was part of a big family, one of eight children.

Jim was raised in Iowa and as a young man moved with his family to a homestead in rural New Boston, Missouri. Jim graduated from Bucklin R-II High School, went back to Iowa to work for a while, then Oklahoma, but eventually returned to the Missouri family home on Ladue Road, where he lived the rest of his life. Jim always had a dog and as a reflection of his gentle nature, dearly loved all his pets.

From a young age he loved to tinker and used his skills and talents to run his own business, The New Boston Garage. He was a hard-working man, incredibly resourceful and sentimental. He listened to public radio daily, loved music of all types and a day didn’t go by that didn’t have music in it. He was an avid reader of all genres including contemporary authors, classical literature (especially Russian authors) and periodicals of all types. He loved being in the timber: hunting and cutting wood. Jim also collected rocks and made a fire pit in the front yard where he often sat with friends. In the winter, there was always a trail of smoke coming from his chimney, keeping his home warm with dinner cooking on the old woodstove.

The walls of Jim’s home and his collections spoke to who he was. Pictures of classic cars and trucks were hung all over the back porch. Jim kept two photo albums on a shelf within easy reach which were full of pictures he had collected showing what was most important to him: family, friends and a lot of music. The walls were adorned with reflections of Jim’s interest in the nations around him with maps of France, Africa, a World Map and of the galaxies above him. A map of the U.S.A. was wrapped around the water heater. Poster size images of music icons were also displayed throughout the living room and on the cabinet doors, both outside as well as on the inside, and showed some of his music heroes: Bob Dylan, The Beatles, Neil Young, etc. Multiple newspaper cuttings and flyers of his brother Pat’s band, the Electric Rag Band, were displayed throughout. Book shelves were full of his vinyl record collection. There were also pictures displayed of past New Boston Folk Festivals, family group photos from annual Memorial Day weekend reunions, pictures of Jim’s kids and several pictures of his mother whom he always referred to with utmost respect. A Chevy truck sitting in the yard bears a Neil Young title, “Rust Never Sleeps” hand-painted by Jim on the fender next to a rusty area (Jim always had a good sense of humor).

Jim was preceded in death by his parents and one sister, Sally Leinhauser.

A graveside service is planned for 12:00 P.M., Saturday, November 30, 2019 at the Nester Cemetery, approximately 2 miles west of New Boston just off Hwy 11. In case of inclement weather, the service will be moved to the Christian Church in New Boston.

Receive notifications about information and event scheduling for James

We encourage you to share your most beloved memories of James here, so that the family and other loved ones can always see it. You can upload cherished photographs, or share your favorite stories, and can even comment on those shared by others.

Posted Nov 21, 2019 at 11:50pm
HEY COOKIE WE ARE REALLY GONNA MISS YOU AND ALL YOU HAVE DONE FOR US LOOKING AFTER THE FARM AND HELPING JERRY WE WILL ALWAYS KEEP YOU IN OUR HEART
Comment Share
Share via: 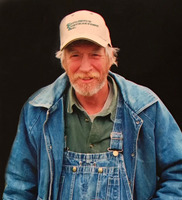